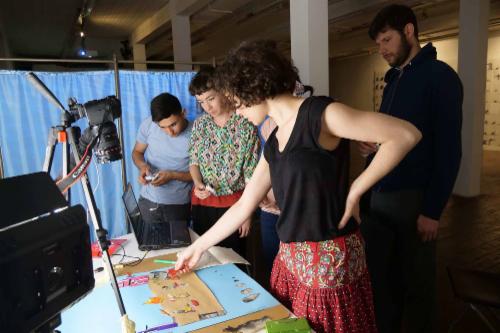 AnimaDoc Workshop will focus on how the mix of documentary/realistic and animation/imaginary can be used creatively in filmmaking. We offer hands-on training of paper cut-out animation technique. Come up with your ideas and 3 of them will be realized.

About Nazlı and Tomáš: Akile Nazlı Kaya is an award winning animator, filmmaker and designer. After receiving her Bachelor of Fine Arts degree from the Graphic Design Department of Bilkent University in Ankara, she moved to Czech Republic in 2005 to study animation at Film School Zlin. In 2012, she obtained her degree in Master of Fine Arts at FAMU Film And TV School Of Academy of Performance Arts, Department of Center of Audiovisual Studies (CAS) in Prague. Her Master's Thesis mainly focused on the uses of classical animation in documentary films. Tomáš Doruška is a Czech-born Editor, Director and Producer of documentary films. He graduated from FAMU’s Editing Department in 2001. As an Editor, he has participated in about 50 projects, both feature films and creative documentaries. Also profiled as a producer, he co-produced his own short doc/fiction 35mm movie debut Radhošť (2001), his graduation film which was released in cinemas and won the 2002 FICC prize. Doruška has taught at a variety of filmmaking workshops and courses during the past 13 years at different universities and film schools. Since 2006, he works as a mentor at FAMU (Film and TV School of the Academy of Performing Arts in Prague) and FAMU International. He is a freelance director, editor and producer in his own company Tomáš Doruška Film.